5 Factors to Consider Before Choosing Best Ad Network for Publishers

Choosing the Ad Network that suits you as a Publisher is a first-and-foremost task when you’re looking out to monetize your App. Every publisher wants to get the best Ad Network on board to generate maximum revenues. At the same time, the publishers have their very own interpretation of what makes one perfect Ad Network for them.

Simplifying things for the publishers, we have created a sort of pre-requisite or factors that define an Ad Network in a better way.

Things to Lookout for before Choosing Best Ad Network 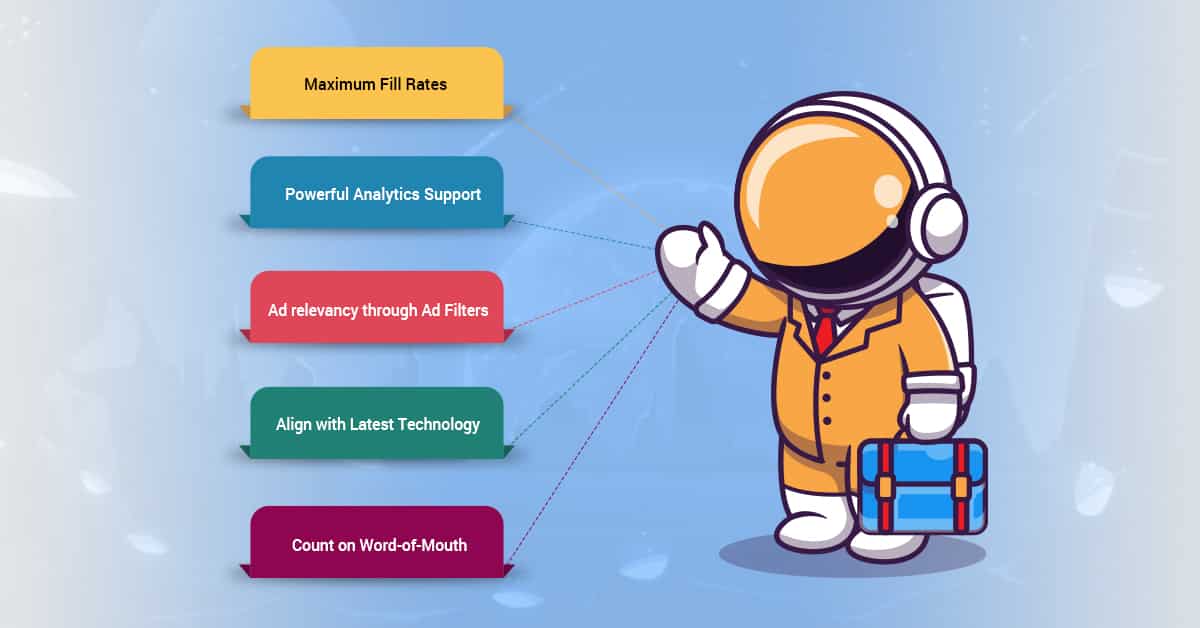 Those Ad Networks with more and proactive Advertisers onboard usually have good fill rates. Here what we mean by good fill rate is each and every opportunity of displaying an ad in your app is rightly utilized to ensure the maximum revenue for the publishers at the end of the day.

Even if you’re making big with your Ad Network but not getting enough of reporting and analytics in your hand, it’s all going in vain. How ruthless of saying that?

It may be, but that’s what it is as having ZERO knowledge about what Ad Placements work for you is not fair on your behalf. Apart from that, analytics and reporting can also let you identify what types of Ad formats work your way.

Settling for bigger revenues regardless of the Ad being shown on your App/Game won’t be the wisest of your choices. No matter how much of a fairy-tale it sounds, make sure you gauge the quality, relevancy and diversity of Ads. Let’s make it simple, you own a Vegan food recipe app and the Ad being shown there are related to kids ages 5 and under. This all still be justified to some, but most of the users will find the ad irrelevant and disruptive, damaging the user’s experience. So, the point is always cross-checking the relevancy of Ads being shown on your platform as they’ll pay off in the longer run.

The jargons not only make it difficult for the newbie publishers but also lead to perplexing the experienced ones. The chop and change in technology isn’t something new and that turns out to boon in disguise for masses.  So, carrying on with the reputation of this technology counting on advanced-level Ad Network will be a safe bet for sure. It can be further exemplified as those Ad Networks offering Programmatic Advertising are indeed a better option at times.

This may sound vague but it can be one handy technique if you can differentiate it between those engineered shout outs and the real ones. The reviews of the previous and the existing users of one Ad Network can better narrate what they are up to. Checking out on third-parties (neutral sources) for reviews will help out for sure. Moreover, you’d get enough of reviews on forums and bigwig platforms like Reddit.