What are the best top games-focused mobile ad formats?

Advertising has become an integral part of almost every digital experience and is emerging as the major source of income for most mobile game publishers. Mobile advertising is now a billion-dollar industry and the credit of its effective reach to millions of people around the globe goes to the top Battle Royale games including the likes of PUBG and Fortnite.

So, if you own a mobile game and want to monetize through ads or earn more revenue through in-app advertising, you should adopt the right ads monetization strategy. There’re multiple factors that impact your in-app advertising revenue, as we have discussed in a previous blog post. As of now, we’ll try to analyze which ad formats are best for mobile games keeping in view the retention and engagement of users.

Before recommending the top games-focused mobile ads formats, I would like you to know that there are some important factors game publishers should know while choosing a suitable ads format for their games. These include achieving the higher eCPM and Fill Rate and analyzing the best placement opportunities. Meanwhile, ads must not interrupt the player experience at any level in your mobile game.

Keeping in view the aforementioned factors, we have compiled a list of best mobile ad formats that can help you elevate your monetization without interrupting the user experience. 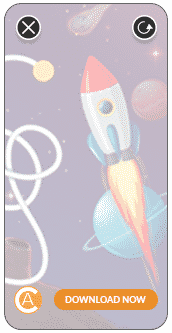 Interstitial Ads are displayed as larger, full-screen ads that are made visually appealing with rich media content and animations. Interstitial Ads could be in the form of both video and static images. Notably, these ads formats perform exceptionally well with mobile games that are divided into different levels and gives users a short break before getting to the next level.

According to experts, due to the deployment of Interstitial Ads between natural gameplay pauses, they tend to offer higher impressions and higher click-through-rate (CTR). But, if you don’t select the right placement for this ad format, it could be intrusive for players. 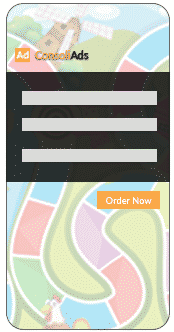 Native Ads are quite similar to banner ads but they are designed to merge into the look and feel of your mobile game. When applied to the right placements, Native Ads seem like a part of the overall flow of the game.

In addition, these ads are usually placed in a discreet manner in the corners of the game screen where the gameplay remains undisrupted. According to research, due to their non-intrusive nature, Native ads have higher CTR and higher conversion rate but a lower CPC as compared to other ads formats.

Another way to make in-game ads less intrusive or even desirable is to offer mobile game players a reward for viewing a short video ad. This reward could be in the form of loot, another life, coins, points, or any other in-game currency that applies to your game.

As revealed in a recent survey, 75% of game developers believe that rewarded video ads are one of the most effective formats because they offer valuable items for your game players, thus increasing retention and engagement. However, due to a relatively complex integration process involved in implementing rewarded video ads in the gameplay, few game publishers try to avoid them.

Apart from these formats, there are few other mobile ad formats like Banner, Icon, and Video ads that could also perform well for your mobile game. Mobile Ad networks like ConsoliAds offers visually appealing multiple ad formats that can help mobile game developers to increase users’ engagement and earn more revenue. Game publishers can sign up with ConsoliAds to easily integrate best performing ad formats in their games and avail highest eCPM’s through Auto-Ad mediation.